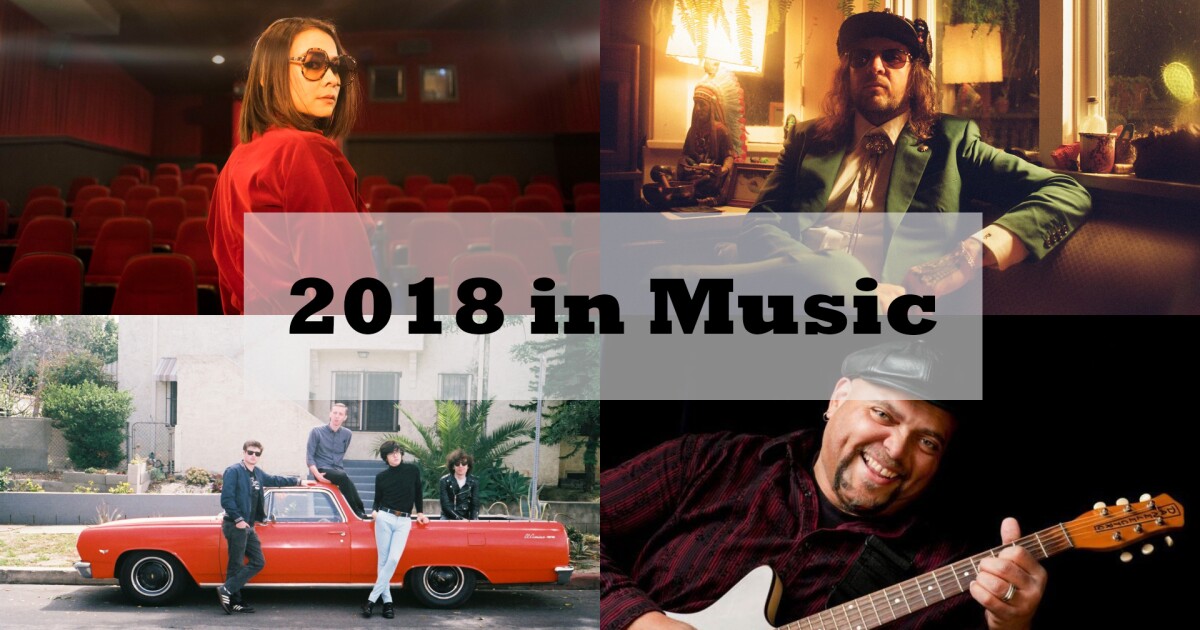 Best Music of 2018 by Iowa Public Radio’s Studio One

2018 has been a bumper year for music of all genres, and Studio One’s team of Iowa Public Radio experts are here to bring you some of their favorites.

In this hour of Talk of Iowa, host Charity Nebbe is joined by Studio One hosts Mark Simmet, Tony Dehner and Bob Dorr for a look back at the last 365 days of music.

To verify “The best IPR titles in 2018on Spotify to hear the Studio One team’s picks, as well as 2018 highlights from the rest of the Iowa Public Radio staff across the state.

Will Toledo started Car Seat Headrest as a solo project, posting his music to Bandcamp at the start. Now, with growing critical success and a recording deal with Matador, Toledo has remade his 2011 lo-fi album titled Mirror To Mirror. The hi-fi version of those same songs is called Face To Face, and the two albums together are dubbed Twin Fantasy. The music is epic and ambitious, with lyrical themes of identity and gender in the context of a special relationship.

2. Tune-Yards – I can feel you stepping into my privacy
This is another group that started out as an artist’s solo project, in this case Merrill Garbus. Tune-Yards is about percussion and rhythms used in the service of Garbus’s observations of herself and her world. She even addresses white privilege and cultural appropriation (maybe hers) on the album.

Superorganism consists of five musicians from five different countries who have met and interacted online, eventually writing and recording music together. The main voice of the group is the teenager of Japanese descent Orono Noguchi. Their debut album is fun and inspiring, and could perhaps be called psychedelic children’s music.
SONG: “Something for your mind”

Once again, an artist and a band, King Tuff specializes in a blend of neo-psychedelic west coast garage rock that really came of age on The Other. Philosophical ruminations on the state of affairs of King Tuff on multiple instruments, aided here and there by fellow West Coasters Ty Segall, Jenny Lewis, Mikal Cronin and others.

SONG: “The heart of the washing machine”

Neko Case has had a long career as an American-influenced singer-songwriter and as a member of The New Pornographers, one of the greatest pop / rock groups of all time. She has collaborated with friends, former bandmates and others on Hell-On, a record that demands your full attention. This album feels personal but not exactly autobiographical, explores a variety of sounds, and is anchored by Case’s legendary powerful voice.

A collection of Bob Dylan covers of one of the best blues / soul / R & B singers in the world. The songs on this album were personally chosen by Ms. LaVette and range from lesser-known songs in Dylan’s catalog to some of her “greatest hits.” LaVette and her band force us to think of these songs in a whole new way.

3. Courtney Barnett, tell me how you really feel
Having officially achieved “full rock star” status, Courtney Barnett’s third album in three years is a bit darker and a bit more low-key than her 2015 LP or last year’s collaboration with Kurt Vile, but the great turns of phrase and the exuberant guitar playing are still there. Certainly a record which rewards repeated listening.

Arctic Monkeys are well known for their strong electric guitars and punk / garage sounds, so fans of the band expected more of the same when they announced the release of their sixth album in 2018. Instead, the group released one of the most polarizing records of the year: a piano-focused concept album on a luxury resort on the moon. The result is fascinating and recommended both for dedicated Arctic Monkeys fans and for anyone willing to try their luck on something a little different.

SONG: “Four out of five”

5. Shannon and the clams – Onion
Oakland, Calif. Based band Shannon & The Clams combine a wide variety of influences to create their sound: classic R&B, surfing, ’60s girl groups,’ 80s punk and more. Their latest record is one of the best pure rock n ‘roll releases in years, and it’s a pleasure to listen to from start to finish.

The greatest blues story in Iowa is that of Kevin Burt. Burt won the International Blues Challenge, recorded with Kid Anderson and Jim Pugh and released his internationally distributed debut album, which is in the top 10 of every blues chart I’ve seen during his premieres. release weeks. Heartland & Soul is the name of the CD. I hope Santa Claus brings you a copy this year. I am SO proud of Kevin. Great talent, hard work, perseverance, humble / grateful attitude.

A few releases from the start of the year are on the “must have” list. Acoustic Album of the Year is the duo of guitarist Alan Hager and multi-winner of the Blues Music Award, soul / harmonica singer Curtis Salgado. The record is Rough Cut. Some classic songs from Big Bill Broonzy, Muddy Waters and Sonnyboy Williamson, but mostly new songs written by Salgado / Hager including this one.

SONG: “So close to nowhere”

3. Nick Moss Band with Dennis Gruenling – The high cost of a cheap life

The other release earlier this year on the “must have” list, especially if you’re like me – lover of the classic 50’s and 60’s Chicago sound / guitar and harp. This CD marks the return to the blues of Chicago guitarist Nick Moss (who has turned in a rock and soul tangent in recent years) coupled with harpist Dennis Gruenling.

SONG: “The high cost of a cheap life”

I am embarrassed that I have only really “discovered” Canadian bluesman Colin James in the past few years, despite the fact that he has won virtually ALL major Canadian blues awards. Excellent guitar playing and strong vocal phrasing in its traditional blues style.

5. Danielle Nicole – Do not Cry

Danielle Nicole had a new release in 2018. She seems to top all blues lists in what’s called the Contemporary Blues category these days. I’ve watched Danielle’s career evolve since the 90s when she sang a few songs with her mom & dad’s band (Little Eva & The Works) at a Kansas City bar that I played every 6-8 weeks. Followed by a band named The Nortons then acclaimed internationally with his brothers in Trampled Under Foot. Not only is she a great singer and a fascinating figure on stage, but she’s also a groove monster on bass.

Minnesotan Joyann Parker is a totally self-produced artist who represented Minnesota at the International Blues Challenge. She co-writes her own songs and also does a tribute to the Patsy Cline show when she’s not doing the blues!

Ivy Ford has been on the Chicago scene for a few years. Ford writes all of his own songs, plays all guitar parts on his Time To Shine CD, and is scheduled to be at the Central Iowa Blues Society Winter Blues Fest in Des Moines on February 2.

Heather Newman’s Burn Me Alive CD is her first, although she’s been playing for over a decade, and it earned her a Blues Blast Award for Best New Artist. She also writes her own songs and is the bassist for her band. Heather is also set to appear at CIBS Blues Fest on February 2.

OK, so favorite blues release. I’m an aspiring harmonica player, so is it any wonder my favorite is a harmonica player? Standard 10-hole harp or chromatic, acoustic or electric harmonica, insightful and humorous lyrical content by a former criminal defense attorney, award-winning law professor at UC Hastings College of the Law and expert commentator on law and politics at Middle East . George Bisharat is his name, he is known as Big Harp George.

As for Backtracks (new music releases that are AT LEAST 25 years old), there was a couple that are definitely “must-see”, including the latest in the Bob Dylan Bootleg series – More Blood On The Tracks and the 50th Anniversary Remix / Remastered disc and demo of the Beatles white album. This is one of the demos that I like better than the release of the original album.
SONG: “Honey Pie – Esher Demo”

There were a lot of great holiday 2018 records. Happy Xmas by Eric Clapton and Christmas Everywhere by Rodney Crowell are on the best holiday list, but the best of this year’s holiday releases is the brand new disc of original songs from rockabilly / Americana artist JD McPherson.

Listen to all of these and other staff picks with this year-end playlist specially created by Iowa Public Radio.