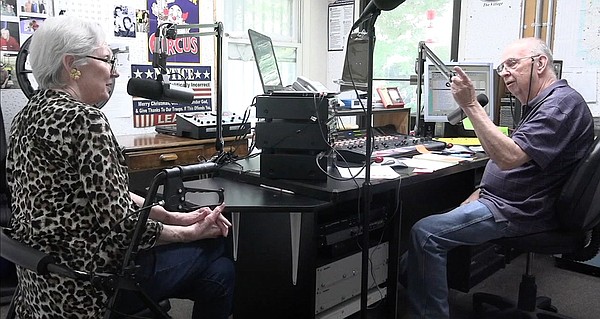 More than 40 years of owning and operating three separate radio stations hasn’t been long enough for Tom Nichols and his wife, Polly, who say retirement is not on their agenda.

The couple currently own KVRE 92.9 FM, located at 122 DeSoto Center Drive in Hot Springs Village, which they started together. The two also host respective radio shows on the station. Tom hosts the “Ask Your Neighbor” show and Polly co-hosts the “Scotty & Polly Show” with the station’s production manager, Scotty Mack.

The family-owned company stands out from other radio stations not only because of its lack of corporate compliance, but because the staff make their listeners feel like friends, the owners said.

“We’re sort of on a first-name basis with a lot of listeners,” Polly Nichols said.

When asked what kind of music KVRE plays, it is difficult to give an answer, they replied. The station airs current hits as well as popular songs from decades past dating back to the 1950s.

Now there is a KVRE app where you can listen to 92.9 from anywhere in the world.

“We were able to move on and experience the world of the internet, in terms of what it meant to us,” Polly Nichols said. “Suddenly we got calls from California. We got a phone call from China.”

With a background as a general manager, now in his 63rd year in the radio/television industry, Tom Nichols and his wife decided to become owners in 1980, helping to establish the first station in Glenwood, KWXI AM.

Before the couple sold it, KWXI had statewide coverage in Arkansas, traveled to northeast Oklahoma and northeast Texas, he said.

After the introduction of the AM station in Glenwood, the Nichols also launched an FM station, KWXE FM.

KVRE was established in the village in 1994, now run by Tom and Polly Nichols’ daughter, Alice Bates.

“The call letters stand for ‘Village, Radio Entertainment,'” Tom Nichols said. “Because that’s what we’re all here for.”

Since the pair were in partnership when KWXI and KWXE were created, KVRE was the first station that was 100% owned by the Nichols family from the start.

“It was an interesting time for me because it was the first time I had lived apart from my husband,” Polly Nichols said. “We had a station manager who had been selected. He had hired them and all of a sudden, coming on the air, she was gone. Well, someone had to run this place and so I ended up occupying the post.”

Polly Nichols managed KVRE on her own for the first four years after its establishment. She was interested in acting in high school, but found herself in the radio entertainment industry after marrying her husband.

She initially received a drama scholarship from Texas Christian University, but stayed in Hot Springs because her mother had medical issues at the time, she said.

Originally, Tom Nichols was dating a friend of his wife when the two first met. This friend introduced them and now they have been married for 55 years.

KVRE owners in Hot Springs Village, Tom Nichols, left, and Polly Nichols explain how they came to own three separate radio stations, including the first in Glenwood. – Photo by Courtney Edwards of The Sentinel-Record

Family friend and production manager, Scotty Mack, left, and the Nichols’ daughter and general manager, Alice Bates, discuss their role at the family radio station. – Photo by Courtney Edwards of The Sentinel-Record

Opened in 1994, KVRE 92.9 FM is located at 122 Desoto Center Dr. in Hot Springs Village. – Photo by Courtney Edwards of The Sentinel-Record

Even in liberal Western Australia, the Catholic Church has too much influence over access to abortion