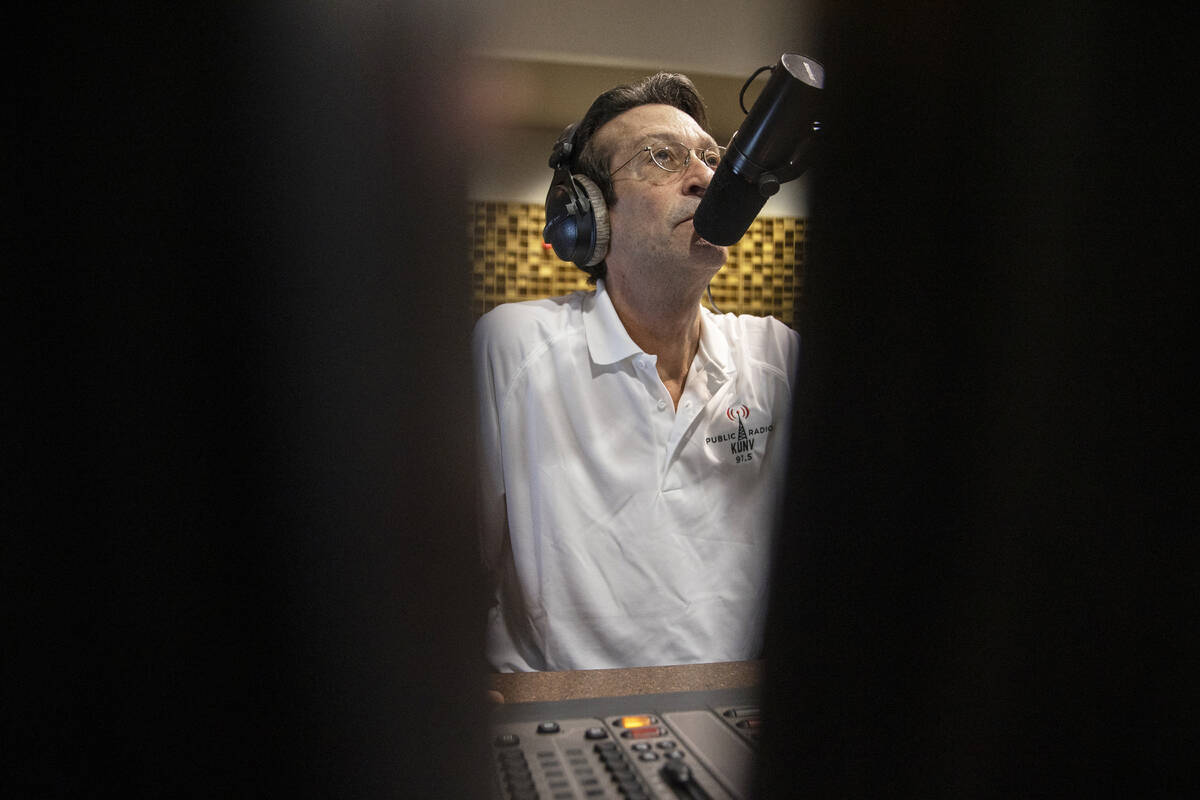 In the nearly deserted studios of KUNV 91.5-FM on the UNLV campus, George Lyons takes care of the tasks – connecting hard drives, familiarizing himself with the array of complicated equipment around him, checking playlists, arranging songs. notes for the right rhythm. he will share soon – required to send his voice and the alternate musical reality he will create into the ether over the next four hours.

Lyons has been the host of “The Lyons Den Radio Show“, a staple of the KUNV program since 1998. Aired Sundays from 8 p.m. to midnight, it’s a seamless mix of rock, jazz, live sets from his own massive collection of concert recordings and everything in between. Lyons, a longtime music and radio fan who has an encyclopedic knowledge of both, finds it worth sharing with listeners, mixed in a non-formatting format that Lyons describes as “schizophrenia.” musical â€.

For fans, the Lyon show is a rendezvous. For everyone, this is the most intriguing show you have yet to hear.

KUNV, the public radio station operated by UNLV, is a jazz station. But on Sundays, it offers an eclectic lineup that spans blues, Hawaiian music, and reggae. “The Lyons Den” tops it off with a show that CEO Ashton Ridley says has a particularly diverse audience.

The general demographics of KUNV are made up of people around 50, says Ridley, but “when you look at the ratings it goes right across the board” for the Lyon show, according to the particular piece of musical arcane. that he programmed. Lyons says his audience ranges from â€œold hippiesâ€ to younger ones who are only now discovering older music. He remembers a UNLV student who thanked Lyon for turning him to Yes and King Crimson, and another who â€œdidn’t know Peter Gabriel was in Genesisâ€ but found out on the show.

The Lyons show also feels intimate in a way that connects â€œsomeone who’s just a disc jockey to someone on the air who is someone you feel is in your living room,â€ Ridley says.

Lyons â€œis fantastic,â€ says Brian Spencer, host of â€œNothin ‘But the Blues,â€ which airs Sunday mornings on KUNV. “He has such eclectic musical tastes that a lot of people don’t.” Unlike KUNV’s other Sunday shows, which play music from specific genres, â€œyou never know what he’s going to do week after week. From Woody Guthrie to Black Sabbath, â€says Spencer.

He’s laughing. â€œSome are good, some are not. It’s all a matter of taste.

Raised on the radio

It is no coincidence that, for listeners of a certain age, â€œThe Lyons Denâ€ recalls the heyday of progressive FM radio. â€œI’ve said a number of times that my show was a throwback to the original programming I heard from the late 60s to the 70s,â€ Lyons says.

He grew up in Los Angeles and got his first AM-FM radio around Christmas 1968, asking his mother what to do with it. â€œI said, ‘I already have a transistor radio.’ She said, ‘No, no, this one has two channels. It’s FM and AM. ‘ I said, ‘What is FM?’ My dad said, â€œTurn it on and see what you can find. “”

What Lyons found were stations playing entire album sides – “the first time I heard Yes’ ‘Fragile’ was on the radio” – and DJs who were shaping disparate musical genres into new ones. amazing sets.

â€œThe first time I heard a mix of rock and roll music was (from Led Zeppelin) ‘Kashmir’ in (Pink Floyd) ‘Us and Them’ and again in ‘Kashmir’,” Lyons says. “It blew me away.”

The music Lyons heard around his house was eclectic in its own way. â€œMy dad loved country music in the car, my mom listened to live music and Glen Campbell and Dinah Washington, my brother listened to rock and roll, and my sister listened to R&B. I just walked around my house and listened to everything.

During this time, his cousins â€‹â€‹were “hardcore bluegrass musicians” and as an Armenian child he was familiar with Middle Eastern music and “watched them play all those weird instruments. So like, the music was still there.

Eventually, Lyons entered the music business, managing bands and artists and booking concerts in Hollywood, and for five years he was the entertainment director of the original Roxbury nightclub. â€œSo I’ve been in and around the industry for years,â€ he says. In the summer of 96, when he moved to Las Vegas, â€œI basically retired from the entertainment industry. But I listened to KUNV regularly.

Lyons knew Matthew Tuttle, aka DJ Shoe, who had a show on KUNV called “Dimensional Dance”. Tuttle introduced him to the station’s director of programs. â€œI just said, ‘I want to play a variety of music, not a specific genre.’ Really, rock and roll, jazz, reggae, all kinds of genres that I was in. I just wish I could plan a show and incorporate my live (concert) bands into it.

“He couldn’t make skin or hair out of it,” said Lyons, smiling. “I bugged him for six months.” After Lyon offered to replace whenever the station needed a submarine, the program director asked them to cover a two-hour shift. Should he follow a playlist? â€œHe said, ‘No, just pick a few tunes.’ I went to the station and picked some tunes that I thought were cool tunes and started playing.

It went well enough that the program director told Lyons, “I’ll give you a three hour shift next week at this time and you can play all your own music and bring your own stuff.” . “

About two hours later, Lyons said, the program director stopped and said, â€œI don’t want your head to get too big, but you’re a hit. People are calling. They love your music.

It marked the start of what would become “The Lyons Den.” The usual format now sees the first half of the show devoted to a musical mix of everything Lyon deems worth sharing, followed by a concert from its collection of cassettes. (The smart money is on The Grateful Dead, because he’s a serious Deadhead who’s seen hundreds of shows.)

It lasted three or four weeks. “Then the guy who hired me said, ‘I don’t want to insult you. I think “Eclectic Excursions” is cool, but I think I have a better name for your show. Let me hit you with: “The Lyons Den.”

“I’m going, ‘Dude, are you kidding me? Perfect. You come into my den and I’ll play my music for you.”

That night, the whole show is a tribute to Charlie Watts, the Rolling Stones drummer who died a few days earlier. In his four-hour tribute, Lyons shares familiar and obscure Stones cuts, live performances, and selections from Watts’s jazz albums. Between sets, his smooth, deep voice – you can hear the DJ FM’s first touches in his cadence and tone – conveys nuggets of information, biographical details and even a story about when Lyon first met Watts. It is a fluid performance worthy of these pioneers of FM that he listened to as a child.

â€œI have a musical background, but I’ve been an incredible fan of radio over the years,â€ Lyons says. â€œI really enjoyed listening to it all, and a lot of that stuff made its way onto my show.

â€œThere isn’t a single thing repeated,â€ he adds. â€œFor me, everything is just a flow of consciousness. I do not know. My father always told me that I have a lot of unnecessary information. So maybe that’s what it is.

Lyon is proud of the show, and just as proud that it is helping to support KUNV-FM, a public radio station that relies on listeners for financial support. â€œI have never been paid a dime for this show. I’m a volunteer, â€Lyons says. “What I’m most proud of about this show is that this show has raised over $ 300,000 for KUNV over 23 years.”

He is also satisfied – and he admits, “pleasantly surprised” – that he and the show have been recognized for the rare niche he has carved out for himself in the radio landscape of southern Nevada: induction into the Nevada Broadcasters Hall of Fame in 2014 and a Best of Las Vegas nods the same year.

â€œI had never done this with the intention of being recognized,â€ he says. “I just intended to have a space on the radio to be able to play music because I thought it was cool.”