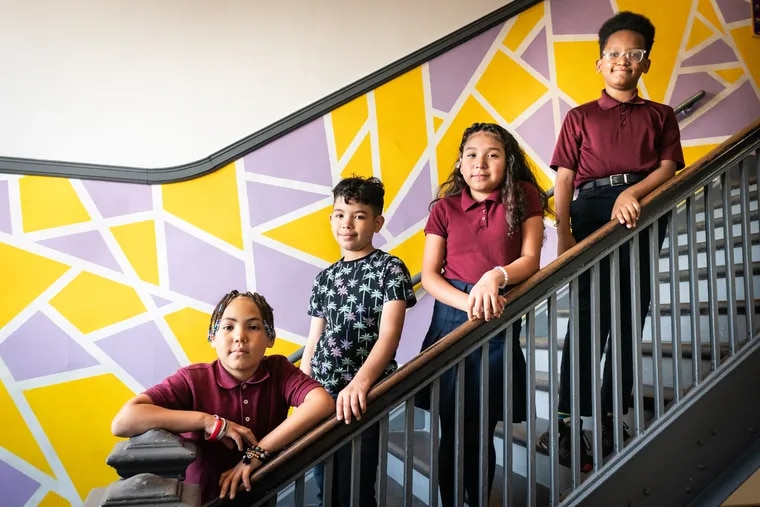 A request to redo the yard at Sheridan Elementary School — with its broken concrete, broken fence and no real space for children to play – languished inside the Philadelphia school district for a decade.

Then came the Change Makers.

The A group of Kensington School fourth graders, organized to fight for things they believe in, told the Philadelphia school board their truth – children speaking loud and clear about how much they love their school, but how badly she needs it.

Jayden Hughes, 10, told council Sheridan needed a new yard “because my friend Brian tripped and hurt his knee and he was bleeding.”

“The sidewalk is cracked all over the school yard and it is a dangerous hazard. …Plus, the fence is super undulating and people can tear it down and break in! Jayden told the school board in October. “Then we have to lock ourselves up, and that’s not fun at all – the kindergarten kids will be almost in tears.”

District officials arrived at Kensington School to begin work on the yard the following day.

“We made this happen,” Devyn Smith, 10, said Monday, still a bit in disbelief. “We just asked.”

The story of grassroots change began with a school visit.

Last October, Sheridan officials invited the school Board Vice-Chair Leticia Egea-Hinton in Kensington for Hispanic Heritage Month. During her visit, student ambassadors gave her a ride – rolling out the red carpet but also without firing a shot. Their school is old, they pointed out, with a lot to fix.

The district of 120,000 students has about 300 buildings, many of which are over 70 years old and in need of major repairs. System-wide, about $5 billion worth of patches are needed. The district has just begun a strategic planning process that could result in new buildings and even school closures and consolidations.

At least 40 students were injured in the courtyard, all bare concrete with no play equipment, in the first two months of the school year, staff said. Football matches were stopped because there were too many injured children.

“Our nurse broke both wrists in the yard,” manager Awilda Balbuena said. “The injuries were crazy.”

Egea-Hinton was not surprised by the children’s poise and eloquence.

But she was moved.

“The needs are huge in the district, and we’re the governance, so we’re looking at things from a much broader scope,” Egea-Hinton said. “But when you hear about the people who are in the schools, actually living in the community, it’s powerful.”

Egea-Hinton suggested that Balbuena and vice-principal Julio Nuñez help students bring their thoughts about Sheridan’s audience to the larger school board. So Balbuena and Nuñez organized a group of fourth graders to brainstorm a question: What would you like to be different in Sheridan?

The schoolyard was the #1 priority. Students helped collect over 100 signatures on a petition asking for improvements. And at last October’s board meeting, Jayden and Devyn spoke, along with Nuñez, another staff member and a relative, waiting hours for their turn to tell officials about Sheridan.

By 10:30 a.m. the next morning, crews had arrived in Sheridan to begin removing the 239 concrete blocks that needed to be replaced.

“It’s something I will never forget,” Jayden said.

The Change Makers don’t stop. Now they want a playground. And their new campaign centers on an issue that has been particularly relevant over the past sweltering weeks.

“We want air conditioning for all grades,” said 10-year-old Ronald Perez. Sheridan is one of 111 schools in the district that lack adequate cooling; its electrical system cannot currently support school-wide air conditioning.

“In all the years I’ve been at my school, I’ve always wanted to have a classroom with an air conditioner. … It doesn’t make me want to come to school, but I still come to school,” said 10-year-old Cindy Hernandez.

Egea-Hinton wants to continue to hear from young people in Sheridan and schools like this who often lack the parent organizations found in high-income schools.

“I was proud of them as I was proud of my children and grandchildren,” she said. At Egea-Hinton’s request, most of the school board members visited Sheridan a few weeks ago.

“We are a district with a lot of problems, but if there are things that are low hanging fruit that can be answered, it encourages these kids to have their voices heard,” Egea-Hinton said. “They believe in their schools, they love their schools and they want to make a difference.”

Balbuena and Nuñez said they look forward to seeing Change Makers grow and tackle more issues important to the community.

“If they have a voice now, their voice will only get stronger next year,” Balbuena said. “Whatever school they go to, they will be heard. They are now their own defenders.

Writers on the Range: I am a journalist and somehow still an optimist

The Fiji Times » Flaws in the business report