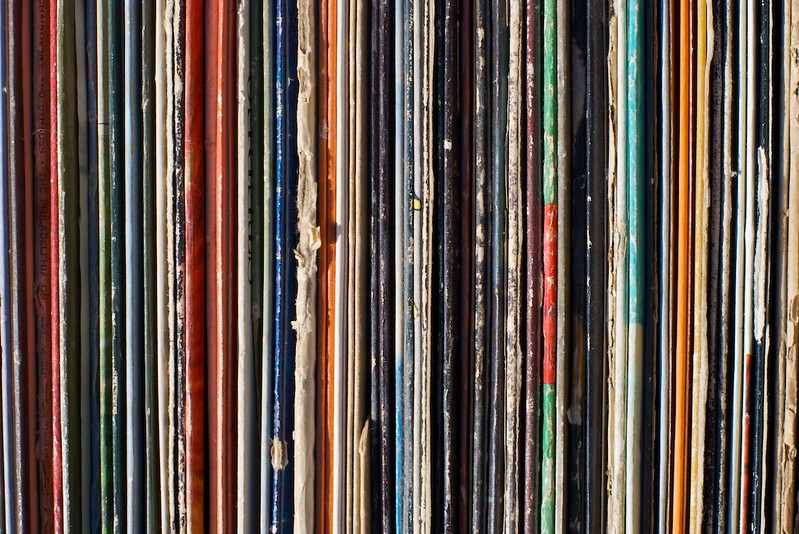 Launch of the Radio Plastique volunteer radio station in Baltimore

After parting ways with several of his records to fund Radio Plastique – while retaining much of his collection – David launched the station in January.

Plastic Radio program offers run the gamut, from Kim Ware’s folk, country and American roots on Great Big Hoping Machine, to Sean Hamilton’s post-apocalyptic vignettes on Burning Glass, to Matthew Rubbish’s deep swan dives into the realms of the classic indie and goth in The New The Indie Hour. Want more of the same? Peep Friday Night Feature, a show where DJs play a record in its entirety. There are also classic standbys like Democracy Now and Essential Tremors hosted by Matthew Byars and City Paper alum Lee Gardener.

Along with his stock of vinyl from years of avid collecting, this sonic little upstart benefits greatly from David’s countless hours of arduous personal work to perfect the site, drawing on his skills honed over years of tinkering with the code in the areas of “enterprise hell”.

David has a backstory that reads like Dr. Samuel Beckett from Quantum Leap. The rowdy former frontman of the Baltimore post-punk band Liquor Bike, and now co-owner of record store and cafe Baby’s On Fire in Mount Vernon, tried his hand at working for distributors, record labels and radio stations . At one point, it even joined the ranks of a burgeoning dotcom world. He also wrote and directed a documentary with Skizz Cyzyk about the cult band Alice Donut entitled “Freaks In Love”.

It was his time as a post-punk troubadour that led him to the fateful pro-choice benefit show at 8X10 he played in the fall of ’92 where he first met his life partner current and co-owner and leader of Baby’s On Fire Shirlé Hale-Koslowski with her riot grrrl band Womyn of Destruction. Like Liquor Bike, WOD established itself on the national scene, eventually reaching places like CBGB where their van was broken into. On the other hand, Joan Jett herself watched them perform their L7 brand of mayhem at that same Big Apple show, so it was well worth it.

Philadelphia native Shirlé had been in Baltimore for about four years when she first met David. She moved here shortly after graduating from the Berklee School Of Music in Boston, where she regularly saw the likes of The Pixies and The Blake Babies. She recalls “I played on the subway for three years with Mary Lou Lord” while taking lessons alongside members of Blonde Redhead and kicking off with her Afro funk-punk band which David describes as akin to “Remain In Light era Talking”. Heads with female voices.

Shirlé, having already played in Baltimore at that point, talks about what set her back. “It seems to me that Baltimore has always been very collaborative on a band level. It was like that when we were younger too. Someone was always opening up a space somewhere.

The Berklee band she had brought back to Baltimore with her eventually took a back seat at WOD which was co-headlining with Liquor Bike on a five-band bill that night of the pro-choice benefit where the first two crossed paths.

David remembers taking this leap of faith: “I was recently single and she was still with someone.
I was like, ‘If you ever break up and you want to hang out or whatever,’” David pauses as he flashes back the years, laughing in an unmistakably native Baltimore accent. “Then months and months passed and eventually she broke up with the boyfriend and we started dating.”

By this point, Liquor Bike was exploding alongside bands like Lungfish and opening for huge bands like Green Day. After years of touring and developing a solid catalog, Liquor Bike caught the eye of a BMG subsidiary label putting them in league with label mates like Brainiac and The Wrens, but ultimately the deal failed. In the late 90s, as their two bands cooled off, the two set their sights on North Carolina. The two stayed on working and rocking there until 2012, when they moved back to Baltimore, where four years later they opened Baby’s On Fire.

For most people that would be enough, but for David the next logical step was obviously to launch a free-form internet radio station, because why not, right? He felt a bit disenchanted with what was on the dial and wanted to bring something new to the table.

The lack of interruptions from commercials makes it feel like you’re listening to a solid personal playlist that a much cooler friend has created for you. The tracks bounce seamlessly between the ’80s ska revival of Selector’s “Too Much Pressure,” to Cocteau’s ethereal twin “Musette And Drums,” to Nirvana’s pleasantly grimy earworm “Very Ape.”

David is optimistic about the resort’s long-term prospects and its ability to stick to its guns. “I want to keep it ad-free as much as possible, although I’m not averse to underwriting.”

Exuding effervescent enthusiasm, David explains how the fruits of his varied pursuits and travels have produced a plethora of DJ talent. “I have DJs in Brooklyn, New York; Richmond, Virginia; Fort Collins, Colorado; Tucson, Arizona, and a group from Baltimore. There’s a guy we named Monty Pop who does a killer show called Choice City Funk Too. This guy has deep 7s and 45s, I’ve known him since I lived in North Carolina.

The Event David and Shirlé have their own show called Singles Going Steady where they each choose six records and present a “what the f**k record”. David says the fun part is “we don’t look at the six discs the other one has”. As for the WTF records, Shirlé says it must be a choice that makes them both say “what the fuck is this record and how did it get into our collection?”

As you can imagine with owning a record store in addition to being a vinylphile who has worked in music all his life, just about anything is likely to show up which adds a delicious level of mess that you probably won’t find on more commercial radios. stations.

David and Shirlé do their show directly from their house and you can hear it from 9am to 10.30am every Friday. To hear what you read about the tour radioplast.com.